My TRIP
Write a review

Khunying Patama Leeswadtrakul said, We are constantly seeking ways to improve and upgrade Arnoma Grand Bangkok to take advantage of its superb and unparalleled location. We are undergoing a renovation and improvement project of the hotel in order to reaffirm our position as one of the leading hotels in the heart of Bangkok; so when we had the opportunity to partner with Ah Yat Abalone Forum Seafood Restaurant which is amongst the most restaurants Asia, we jumped at the opportunity to expand and redesign to be ready to open in July as the second Ah Yat Abalone Forum Seafood Restaurant branch in Thailand covering over 1,000 square metres.

We are delighted to be partnering with such a famous brand in the food industry as Ah Yat Abalone Forum Seafood Restaurant, added Khunying Pattama. 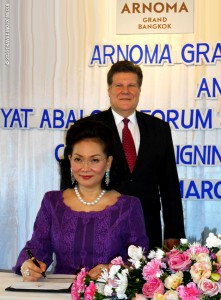 Mr. Eric Brand, General Manager and Director of Operations said, We have carried out many improvements including a new Lobby, Driveway and Reception as well as opening Mango 99, our new All Day Dining Restaurant, and there is more to come. We have plans for additional restaurants and a Wine Bar as well as a renovation program for all guest rooms. With our newly renovated Ballroom we are also an ideal venue for weddings.

As regards Ah Yat Abalone Forum Seafood Restaurant, apart from the main restaurant area, there are nine private dining rooms, six of which can be opened up to create a huge private dining venue, and a top table seating for 15 diners, added Khun Eric.

Chinese Cuisine has gained worldwide recognition since a few thousands ago. Since then, Abalone has found its way into the Chinese menu. Although Chinese had learned how to cook Abalone early in the history, Mr Yeung Koon Yat has earned a place in Chinese annals for developing a unique cooking technique for Abalone called "Ah Yat Abalone". "Ah Yat Abalone" won worldwide acclaim when Mr Yeung prepared it for the leaders of China and got their strong endorsement. Mr Yueng has successfully brought "Abalone" into the international culinary arena. The saying of "Ah Yat Abalone, Best in the world" whcih fame follows merit. 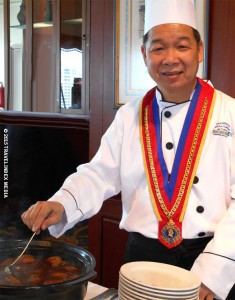 Mr Yeung Koon Yat is well known and admired in culinary arena through his excellent and unique culinary art in cooking Abalone. He has won numerous international awards and honorary medals since 1988. ln 1990, he was the first person to be honoured with the "Order de St Fortunat" Merit Gastronomique by Club Prosper Montagne along with the title of "Personnalité de l'Année" Distinction Internationale. Two years later, he was nominated for membership in the prestigious "Le Club des Chefs des Chefs" and he was made honorary Chinese Cuisine Euro Toques President of Asia. In 1995, he was further awarded the Gold Medal from the "Le Club des Chefs des Chefs" as well as the greatest honour for French Chef, the "Medaille d'honneur de Vermeil". In 1999, he was awarded the French Department of Agriculture's highest award, the "Chevalier de l'Ordre du Mérite Agricole". However Mr Yeung is not resting on his laurels and even today he still active on rhe culinary scene with hts efforts in developing new culinary techniques.

Ah Yat Abalone Forum Seafood Restaurants have 17 Branches worldwide and are famous for their unique selection of fresh seafood, flown in live weekly to its Regional Headquarters in Singapore, from where it is distributed live, to its Branches worldwide. Specialties include Alaska Crab, Lobster from Australia, Razor Clams from Scotland and more and all will be delivered live at the Ah Yat Abalone Forum Seafood Restaurant at the Arnoma Grand Bangkok, weekly. 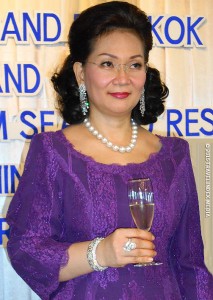 Arnoma Grand Bangkok is part of the Arnoma Hotels and Resorts Group and a sister property of the The Felix Kanchanaburi which will eventually be rebranded as Arnoma Resort in Kanchanaburi. With its unrivalled location close to many of Bangkok’s premier office towers, within walking distance of some of Bangkok’s best shopping choices, with 369 Rooms and suites and state of the art meeting facilities suitable for meetings and functions of all types, Arnoma Grand is one of Ratchaprasong’s iconic properties.